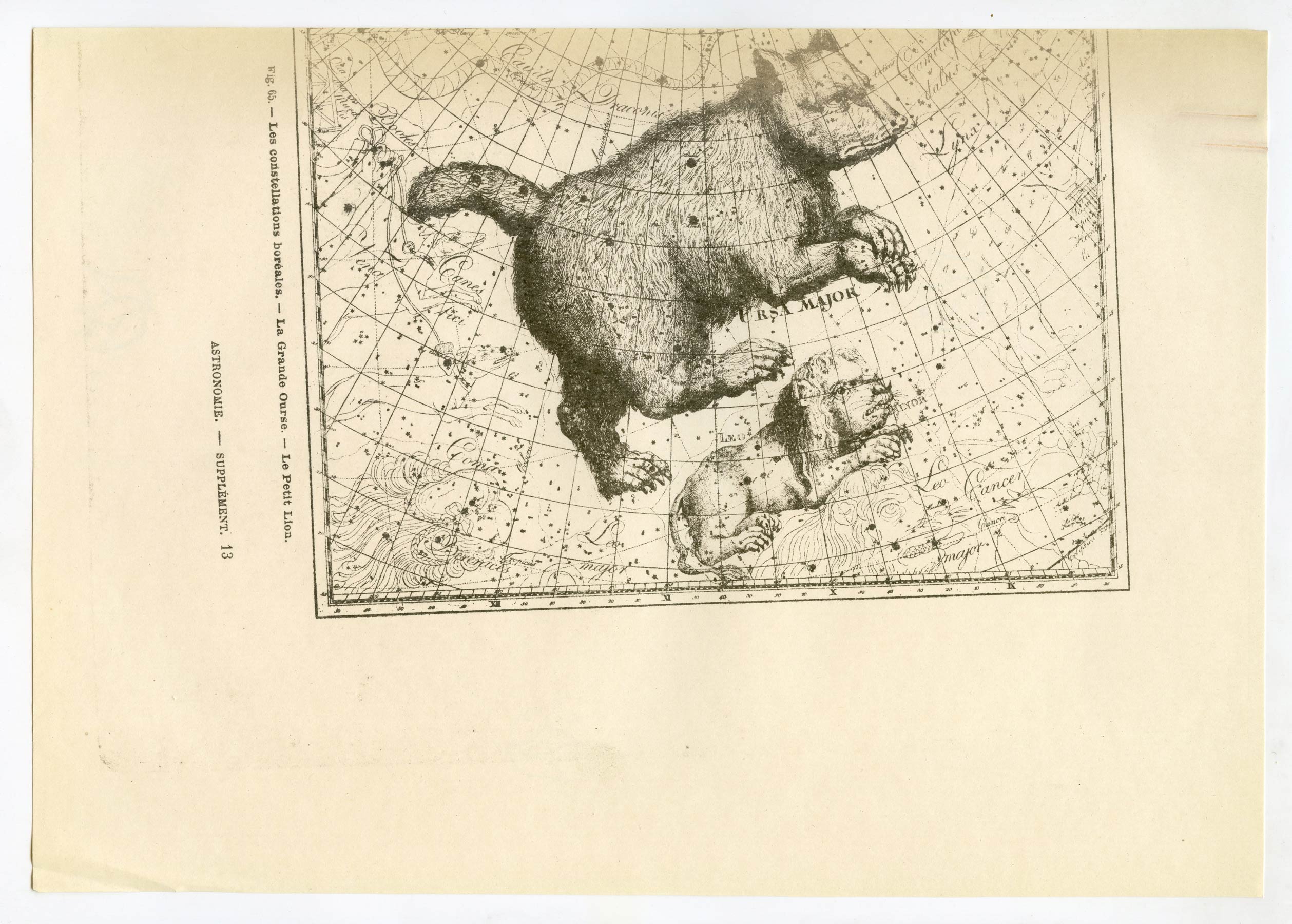 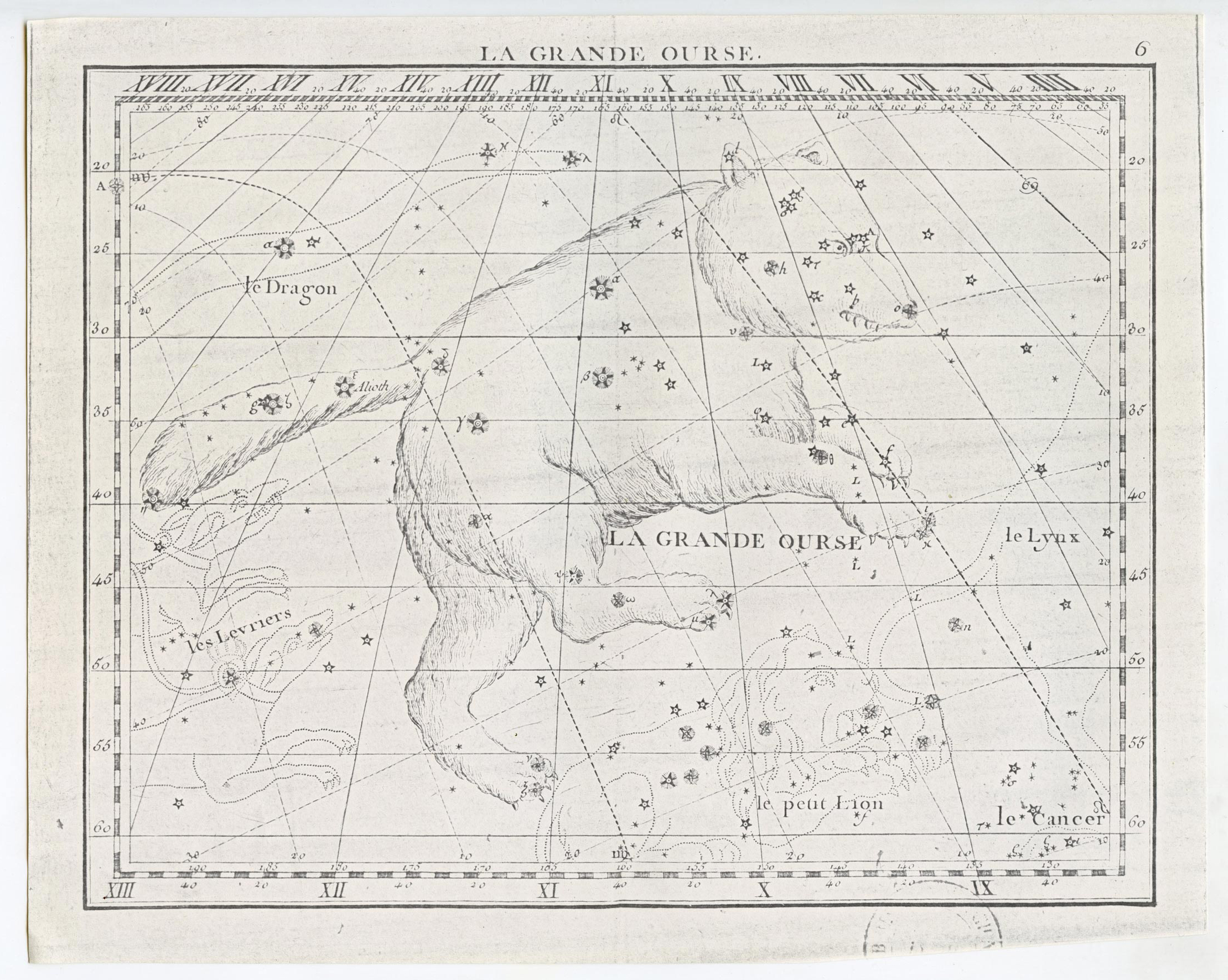 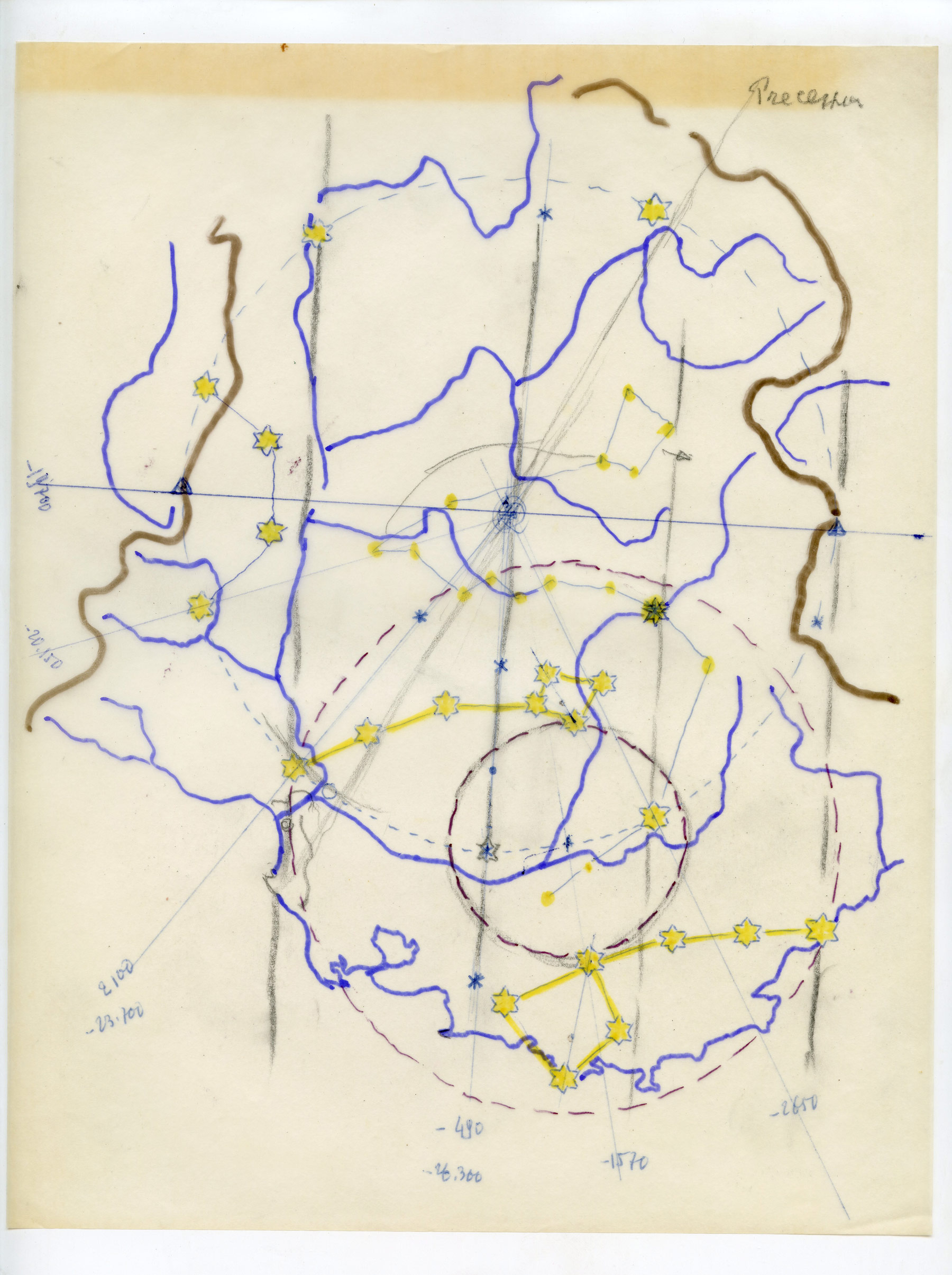 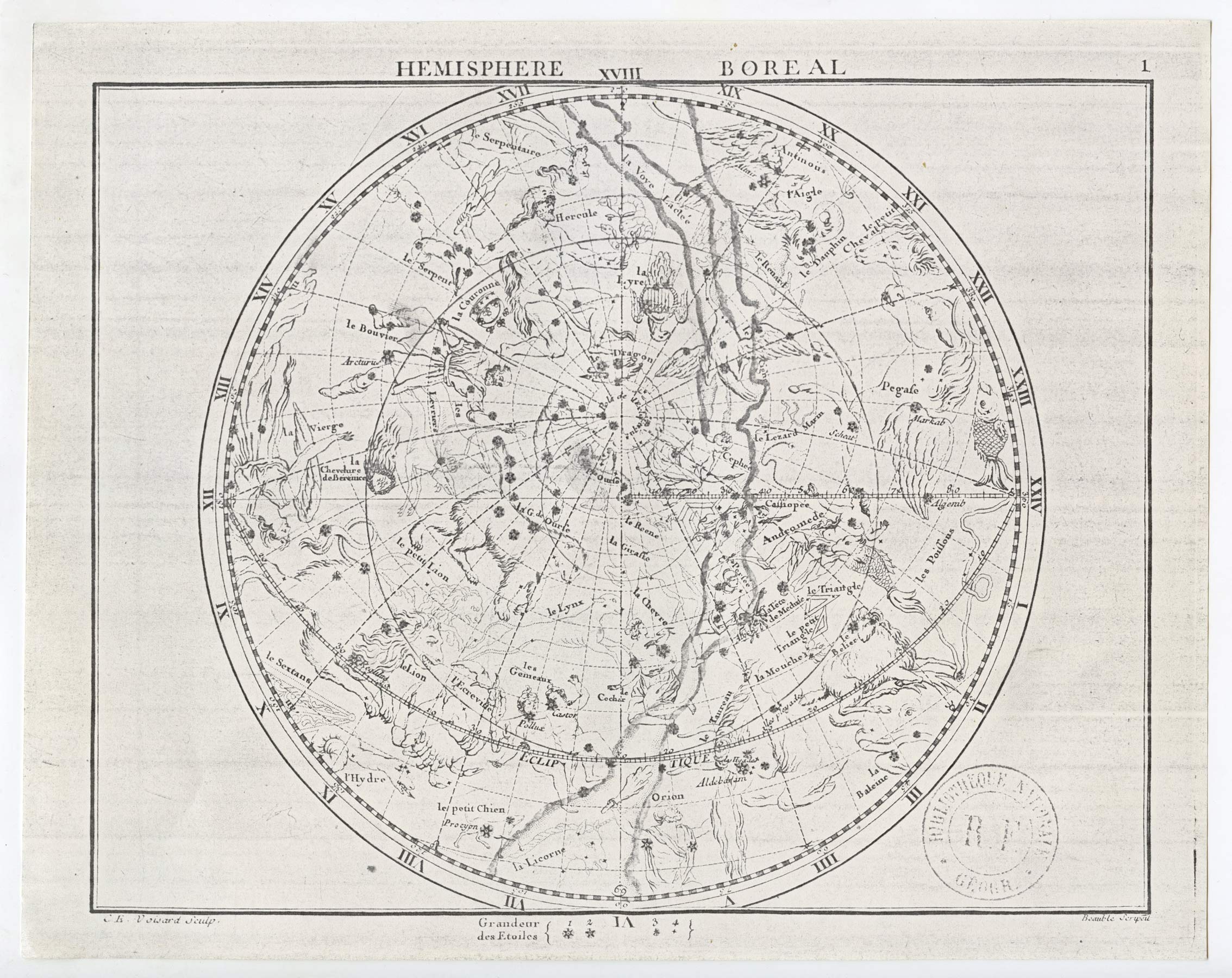 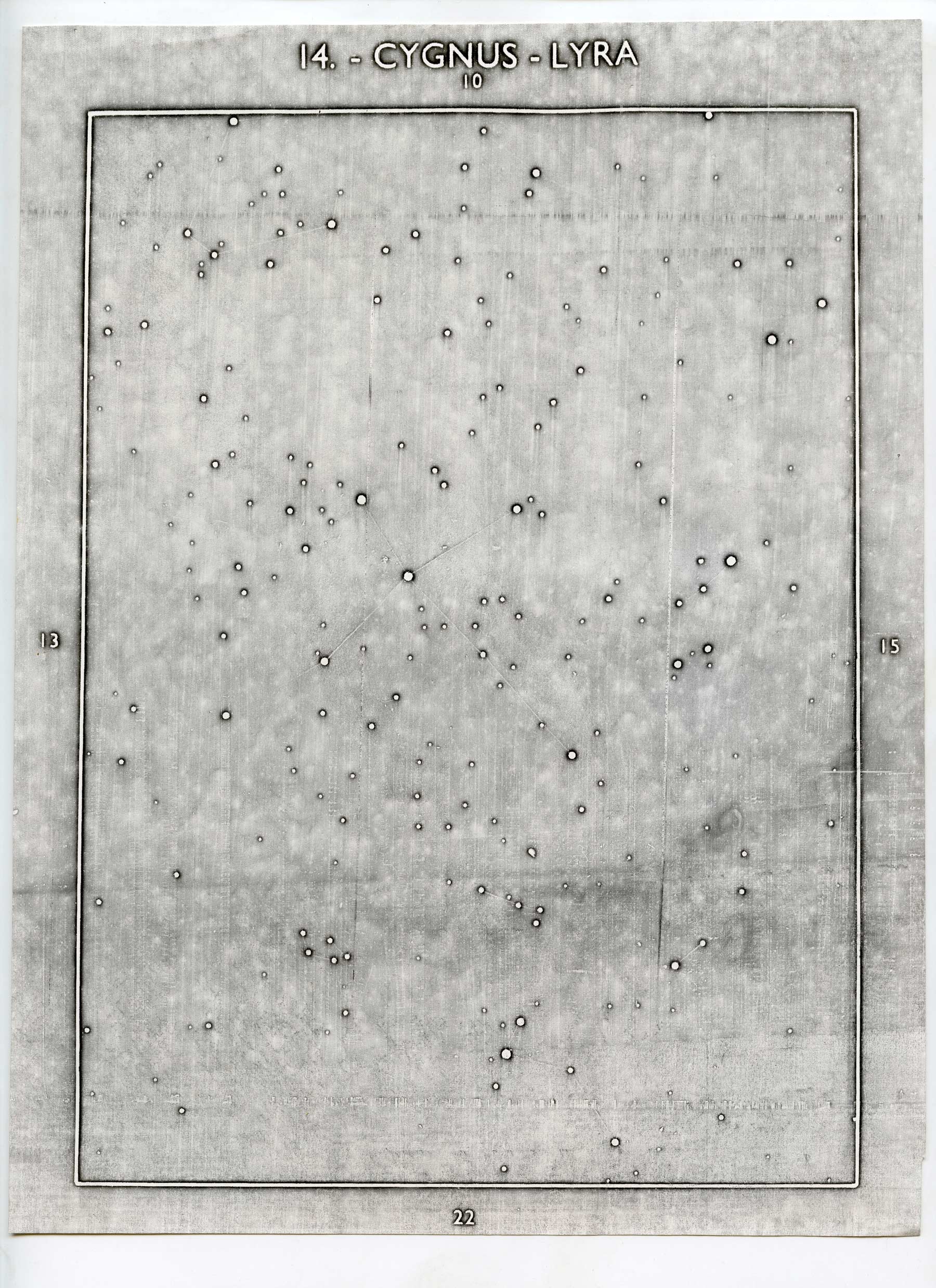 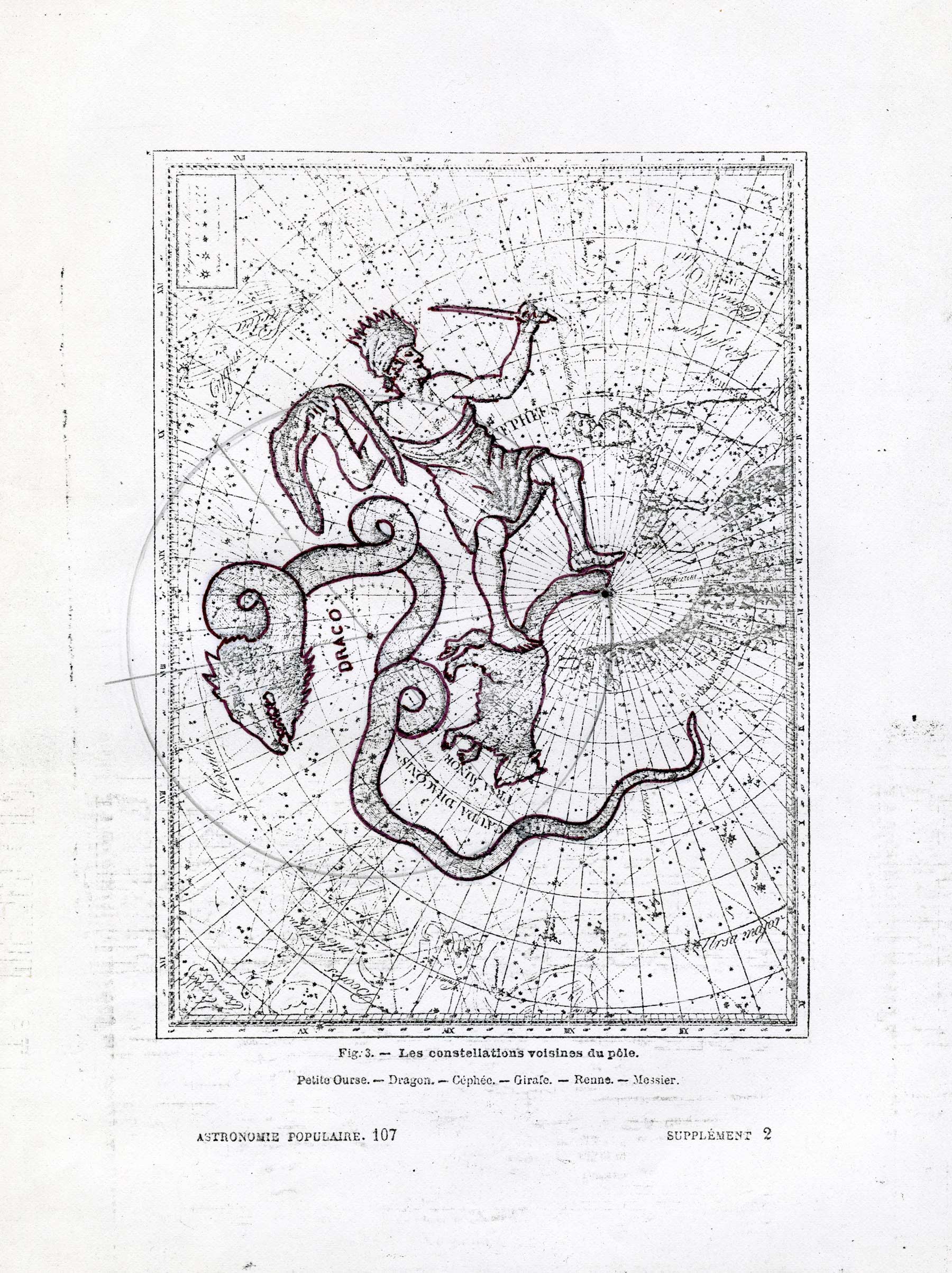 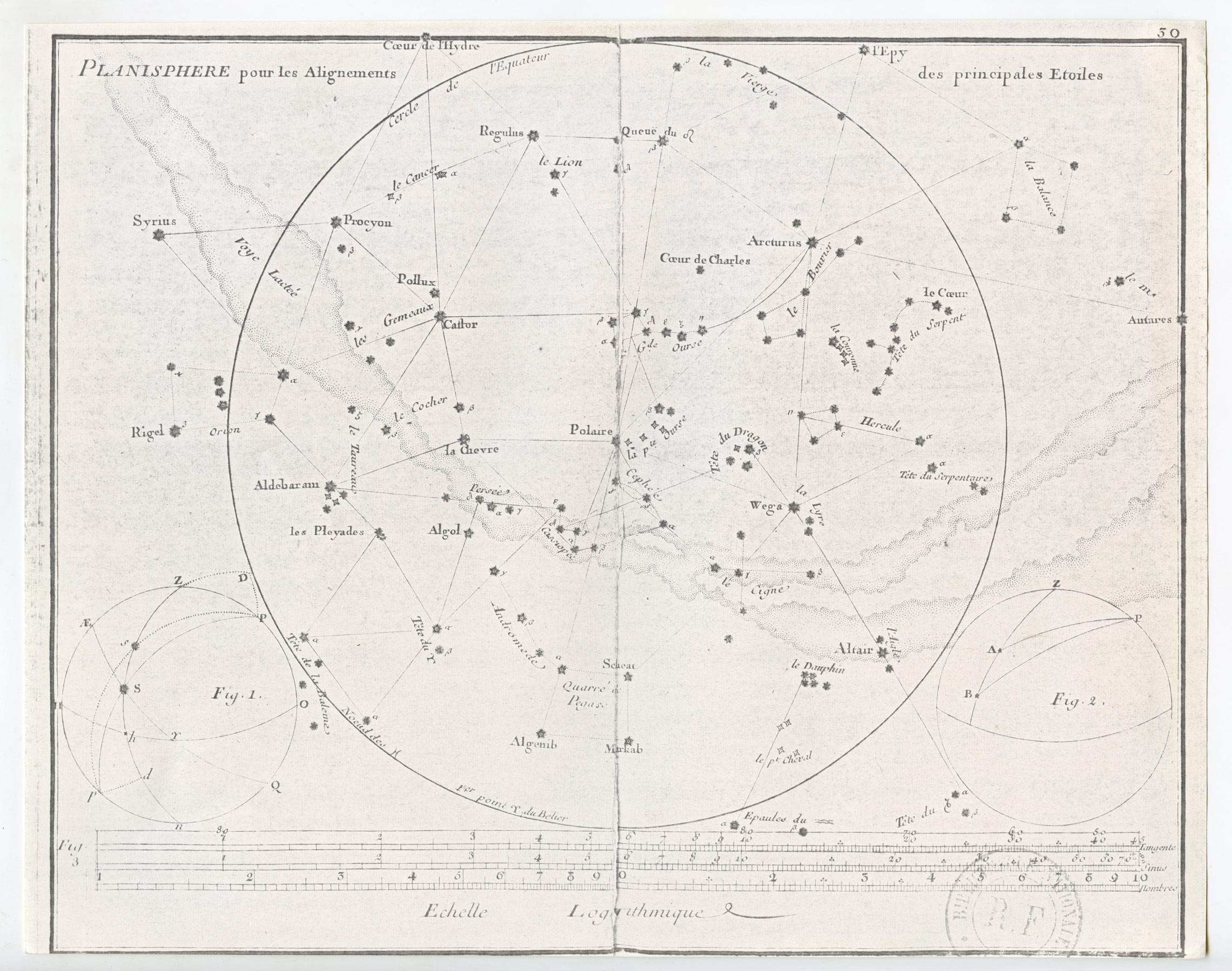 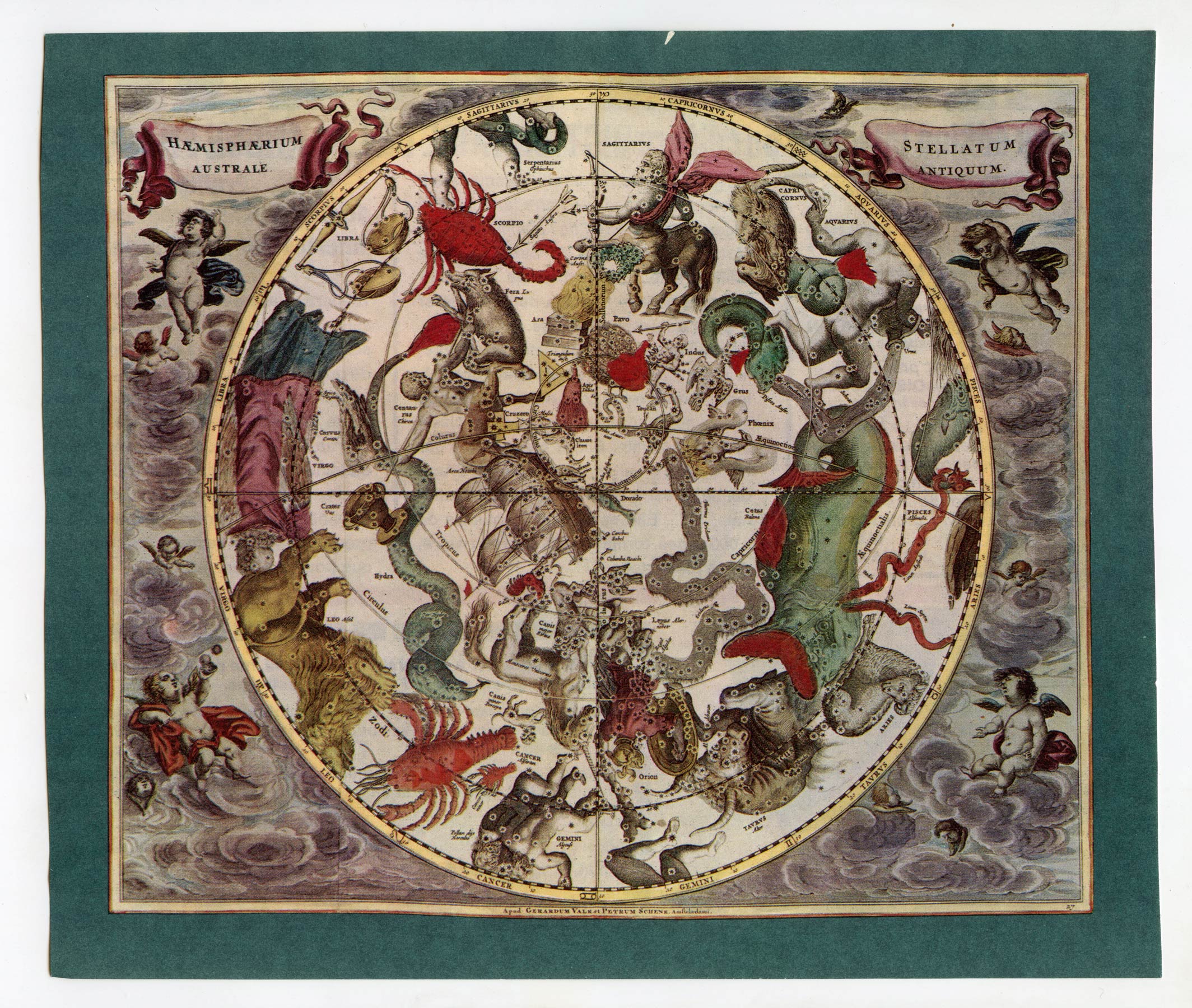 The coat of arms of the Princes of Baux is “a comet or star with sixteen Silver Rays over a field of Maws”; also, as is being told by the historian César de Nostredame, elder son of Nostradamus, its opposite coat of arms is “a star with sixteen Rays of Maws over a Silver field”, which is the one of Blaccas, lords of Aups and Moustiers-Ste-Marie.

And it is curious to notice that the vlllages of Baux and Aups are placed exactly symmetrically on each side of the “great alignment of stars”. The comet with sixteen rays of the Baux is, for the princes of this House, a recognition sign of tradition, coming from their great ancestor Balthazar, the magi, king of Arabia, who came from bethlehem guided by the “Star”. It is said that Balthazar, seduced by its charm and beauty, was taken by the land of Provence the day his ship reached the mediterranean coast of “Septentrion”. Did you understand it well? Would it be that “Septentrion” which means, to us, the North? Can we talk of Septentrion for the sunny coasts of our mediterranean South?

All this deserves some thinking: we needed to find an explanation. What does Septentrion exactly means? In latin, this word is the contraction of “Seven Bulls”. Who are the seven bulls? For ancient astronomists, they are the seven stars of the Ursa Major constellation. And here we are, once again going through traditions and legends, researching a proper interpretation of the presence of the Ursa major’s “seven bulls” on the ground of Provence. Through this “quest for the Stars”, through this land, it is by using toponymy, the study of the name of places, that we will get the clue to our enigma.

It is easy to notice that a large number of locations names are to be found in couples: one in the northern mounty part of Provence, the other on the southern shore. Historians managed to find simplistic and believable explanations to this fact.

Nevertheless we found the need to deepen this question by studying each case.

We have already spoken about Simane-Collongue near the Great Star, North of Marseille, and Simiane-La-Rotonde, located on the Albion’ plateau. Mentioning that Simiane is the name of a family of Lords, whose land was spread over the great alignment : “Peak of the Great Star, Great Star of the valley of Aigues, Stars of Monts in Dauphiné” doesn’t explain everything and leaves a total mystery surrounding this alignment.

But other names would give us even more surprises.

On the coastal zone of Provence exists a venerated region called “Saint Beaume”, a mountain range where Marie-Madeleine found refuge.

Starting at the northern sources of Arc and Argens, this range and its dependancies, like “Saint-Pilon”, Mount Caune, and Mount Faron, spread South until Cap Sicié and the roadstead of Toulon in Mediterranean sea.

It can roughly be delimited by a quadrilateral shape, made by the villages of Vallaury, near Solliers, East, Le Brusc in front of the island of Embiez, South, Eoures, near Aubagne, West, and the castle of Valbelle in Tourves, North.

But if we get back North, beyond the Mounts of Lure, in the border region between Provence and Dauphiné, we find another quadrilateral shape made by Valaury, former land of Valerne, not far from Durance, Le Brusq, on top of the gorges of Méouge, a tributary of the Buech, Eourres between the mountain of Muou and Chanteduc, and finally Valbelle between the Jabron and Mount Lure. Valbelle counts on its land the curious grotto of Saint-Pons, resembling by its aspect and location to the grotto of Marie-Madeleine, the Saint-Baume.

Moreover, to our great surprise we noticed that if you extend the larger quadrilateral shape with the shaft of the Orsa Major chariot, then you will find that its extremity is exactly located on the “Peak of the Bear”* in the Esterel mountains. Nowadays the TV waves radiates from that this “Peak of the Bear”*over the whole Riviera, and you can find nearby another “Saint-Baume” and “Saint-Pilon”.

It is not far from the Esterel’ shores, in Antibes, that was found a tombstone, know as the one of the dancing child, which is today placed in the reception room of the Picasso museum of the Antibes castle.

which means: “to the Manes Gods of the Child of Septentrion, twelve years of age, who in Antibes, in the Theater, danced for two days and delighted everyone”.

But our astonishment shouldn’t stop here.

We know that in order to locate the Northern Star, we need to extend five times the outer side of the Ursa Major chariot, made by two stars called the Guardians.

Doing this operation on the ground of Provence starting from Brusc and Eoures would lead us straight to the “Ermitage of Saint-Baume”, located on the territory of the village of Lirac, in Gard, not far from the village of Orsan dedicated to a Bear, on the right bank of the Rhone river that used to belong to the diocese of Avignon.

North of Lirac, following the same meridian (same as Montmajour and Cluny), in the church Saint-Laurent in Rochemaure, we can see the famous square with magic properties:

One of the ermit in Saint-Baume of Lorac was brother Hugues de Saint-Bruno, alias knight Perrin de Bagaris, author of scholar publications over astronomy, including: “the Golden Number Table” “the Cycle of Epacts” “the Universal Period of the World” “the perpetual Wheel of Equinoxes”

The last lords of Lirac and Saint-Baume were the Restaurand, whose coat of arms was “ of Silver to a Phenix over immortality, fixing a Golden Sun, in nature whole”.

This phenix, the fabulous bird, who re-birth from his ashes eternally, is the true symbol of the Northern Star, as we will see a little bit further.

On Earth, the Ursa Minor unfolds through the Comtat Venaissin, and if we look it up etymologically, it seems obvious to find a relation from Phoenice to Phenice, Venice, Venise, and from Phoenician to Venaissin.

The two stars of the Shaft are also called the waltzing dancers, because of their fast rotation around the Northern Star. They correspond to the villages of Baume de Venise and of Brantes, which get its name from brantula: wobbly, dancing.

Dante named the Ursa Major “the Chariot” and the Ursa Minor “the Cor” in his admirable poetic description of the sky:

“that the one who wants to understand imagine what I live then and get a grip of the picture of what I tell, as if on a solid rock.

Fifteen stars in different places enlighten the sky of such brightness that it dominates the heaviness of air.

That he imagines as well the “Chariot” to which the field of our sky is enough, night and day, as he turns never he looses his shaft.

That he imagines again the mouth of the “Cor” hose beginning, its pointy end, is an axis around which revolves the first circle.

That he sees how it forms two signs in the sky.”

Through the territory of the “Cor”, the Ursa Minor, unrolls the “Road of the Princes of Orange” joining the numerous ancient possessions of this grand lord family.

Even after becoming the Royal family of Holland, the family of Orange still wears as always the “Golden Crown, the Azur Cor, bound, attached with Maws”

At the extreme opposite of the Ursa Minor, the land of Valaury belong to the Vicomte of Valernes, whose viscounts had as coat of arms “ the Silver Cor, bound with Mows, on an Azur Field”.

Those surprising coincidences, first results of our research, didn’t allow us to stop there.

We had to try everything to find what could either contradict or confirm : we had to investigate.

The phenix reborn from his own ashes from the Restaurand, lords of Lirac, and “the perpetual Wheel of the Equinoxes” of the knight of Bagaris, permit of the Saint-Baume, would lead us in the beat of times, of stars and gods, in pursuit of the universal “eternal return”, as Jean-Charles Pichon knew how to evoke so masterfully.