About The Sky is on the Earth 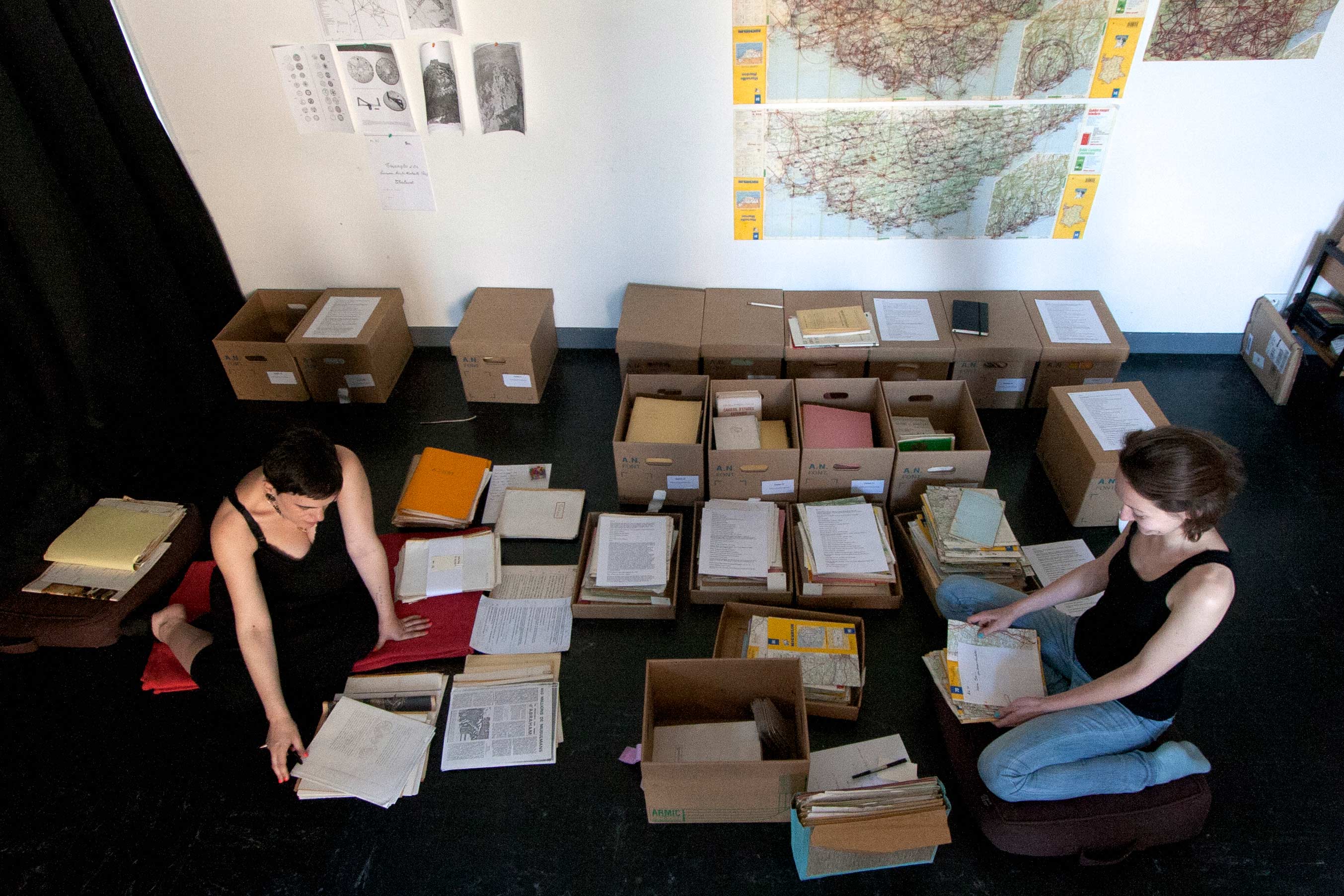 Since 2014, the artists duo researches and intervenes with the found archive of Jacques Bourlanges, author of an intriguing theory of a correlation between star constellations and French geography focused on the region of Marseille. His investigation connects esoteric symbols with long forgotten history of villages and mountain names by mirroring geometric figures of stars onto the French landscape. With his passing away in 1991, he left an archive of twenty-four boxes, that waited in oblivion until 2013. It contains an overwhelming abundance of notes, carefully organised in self-made folders, geometric drawings and a profusion of maps overlapped with mysterious lines, as well as a multitude of list of names, places and word, connected by their written and spoken melody.

In 1977 Jacques condensed his obsessive research in a thesis of 99 pages self-published and entitled in French “Le Ciel est sur la Terre” (The Sky is on the Earth), starting point and title of the project. According to Jacques, everything is connected and reading him forces you to dive into the fascinating obsession of his obscure mind, sometimes brilliant, sometimes obsolete.

Subject of particular attention in the 70’s, this type of esoteric theory is nowadays out-of-date. By repositioning it around the duality between finitude and eternity, Khurtova & Bourlanges propose new narratives of connections between the earth and the sky, matter and words, soil and voice. The duo's approach merges the scale of landscape with the scale of the archive paper, intentionally blurring boundaries between form and content of the archive, they bring accent to the (hidden) structures of Jacques’ thoughts on paper the same way he unraveled hidden structures of constructed landscape, creating poetical connections between matter and meaning. They dig earth in specific places described by Jacques and transform it as prints, sculpture or performative acts. They replicate the archive boxes in earth, fired or raw; create sculptural landscapes using the scribbled maps of Jacques, weave the obsessive lists of Jacques, reproduce the quantity of documents in porcelain strata of such fragility that each movement lead them to inevitable destruction.

The tactility of the elements and experiences echo to the fragility of physical traces we may leave behind, as well as the ones superimposed on us and our physical environment by higher forces, while making visible and partially unravel the mysterious way one’s mind can function: obsessive and compulsive, logical and associative, pragmatic and unreasonable.

Khurtova & Bourlanges were selected as artists in residency at Atelier Holsboer in La Cité des Arts in Paris – period April-September 2014 – by the Mondriaan fund as a first phase of research.

Khurtova & Bourlanges is an Amsterdam based artist-duo comprising Elena Khurtova (1982, Samara, Russia) and Marie Ilse Bourlanges (1983, Paris, France). Actively collaborating since 2009, the works of Khurtova & Bourlanges are a sculptural investigation that conceive the work as a process. Equally fascinated by the conceptual and narrative qualities of materials, the duo often employ those materials that overcome the gap between form and content whilst still maintaining their temporality and vulnerability. Khurtova and Bourlanges met while they were studying Architectural Design at the Gerrit Rietveld Academie, Amsterdam, where they are both currently tutors.

They also teach at the Royal Academy of the Arts, The Hague and curate in the fields of design and architecture. Since acquiring the archives of Jacques Bourlanges in 2014, the artists have actively implemented their artistic interference onto this gathered content, each time generating new meanings and making visible the mysterious ways in which the mind can work.